A cookie is information stored on your computer by a website you visit. Cookies often store your settings for a website, such as your preferred language or location. This allows the site to present you with information customized to fit your needs. As per the GDPR law, companies need to get your explicit approval to collect your data. Some of these cookies are ‘strictly necessary’ to provide the basic functions of the website and can not be turned off, while others if present, have the option of being turned off. Learn more about our Privacy and Cookie policies. These can be managed also from our cookie policy page.

IE10 and below are not supported.

Article/The New York Times: "The warming atmosphere is causing an arm of the powerful Gulf Stream to weaken"

A recent article from Moises Velasquez-Manoff & Jeremy White looks at changing ocean currents in the North Atlantic Ocean, focusing on the Gulf Stream. 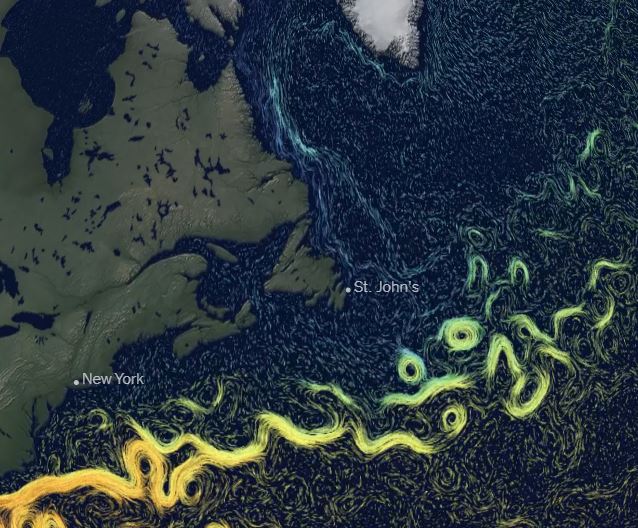 The interactive globe shows the current moving past Newfoundland

The authors note that one arm of the Gulf Stream, which moves northward, transporting warm water to Iceland, is slowing down (citing many recent studies, including this one), and that, "without this current — a heat pump on a planetary scale — scientists believe that great swaths of the world might look quite different."

“We’re all wishing it’s not true,” Peter de Menocal, a paleoceanographer and president and director of the Woods Hole Oceanographic Institution, said of the changing ocean currents. “Because if that happens, it’s just a monstrous change.”

Some consequences could include: (1) faster sea level rise along parts of the Eastern United States and parts of Europe; (2) stronger hurricanes in the Southeastern United States; and (3) reduced rainfall across the Sahel, a "semi-arid swath of land running the width of Africa that is already a geopolitical tinderbox."

The article includes an interactive globe that shows the Gulf Streams movement, drawing on data from the Overturning in the Subpolar North Atlantic Program project.

Read the article and view the interactive globe here.